Up north here in Madison we had some very good weather this past weekend… considering it is still April, 70s on Saturday and pushing 80 on Sunday.

On Friday night, it was just a little tortuous to not hit the lake with the good weather, but I had planned on attending a concert that night. Plus everyone that would’ve been skiing with me was going to the concert too. Caught the Wisconsin Singers and UW MadHatters at the Wisconsin Union Theater doing a fund raiser for the UW Children’s Hospital. The Wisconsin Singers were good, they combine unique arrangements of popular music with dance and they pulled off both pretty good. The MadHatters were wow… Definitely recommend catching them at some point in their own show. Very glad I went to the show. After the show we (Bugs, Ronée, Imhoff and myself) hit up the Great Dane and then a piano bar.) Made for a late night but it was a lot of fun.

After working on the our ski team’s doc most of the morning and mowing my lawn that afternoon, I hit the lake on Saturday afternoon with 7, John and Beau. The forecast called for a calm 5 MPH wind out of the northwest. In reality, we had 15 MPH winds gusting to 20. Not ideal ski conditions, but actually a pretty good direction for the wind to come from for Lake Monona. Skied along the John Nolen Drive shore in relatively calm water. Had a couple nice foot runs. The main lake is now a balmy 49 degrees. I braved it with just a wetsuit, but it was cold. 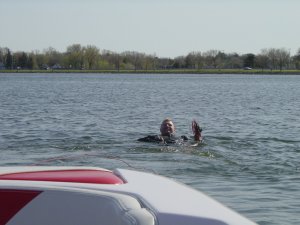 For those that don’t know, this is how you get up barefooting…

Beautiful day for a barefoot walk around the lake… 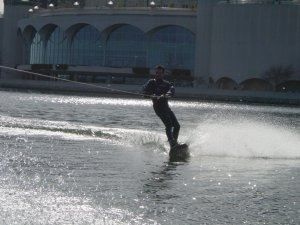 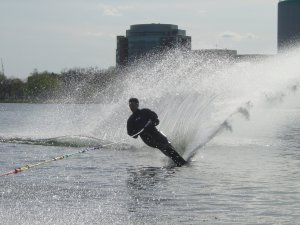 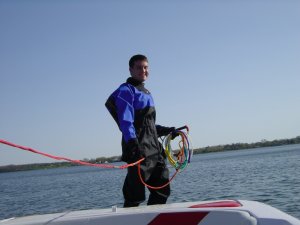 John posing for the camera before his run

John on the slalom ski

John on the slalom ski again

Then Beau shows up and back foots

That night I hit the Weary Traveler and ran into T-Bell. Ate some dinner, drank some German Pilsner and then headed across the street to celebrate Bug’s 30th birthday.

The next day I hit the lake with T-Bell and Lisa D. Once again the wind was strong, this time out of the southwest and still pushing 20 MPH with even stronger gusts. We hit the bay in search of calm water. Monona Bay, just off the main lake, had a water temp of about 59 degrees… much nicer. I was still a bit drained from the previous day (read into that what you want) but once I hit the water, I felt great. Still felt sun burned though. Lisa braved the water in little more than her swim suit and didn’t complain. T-Bell, sporting a barefoot suit claimed we were lying about the water being nice and warm. 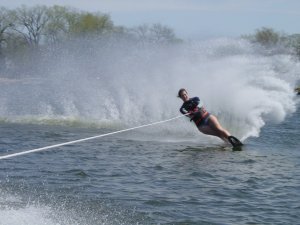 Lisa D on her slalom ski. She braved the water in little more than her swim suit. Hadn’t skied in nearly a year
and still can cut it up on the slalom ski. Managed to maintain her cuts all the way through the wake.

Finished up on Sunday by attending our dry land practice… nothing like centering four highs with sun burned shoulders. Not so fun.

All in all, a very good weekend, even with the wind. Now I just need about another 30 or so of these and I’ll be a happy camper.

BTW, tonight, its pouring rain again. Severe t-storm warning is probably causing my HD recording of 24 to be in SD. That’ll piss me off. Stupid weather.