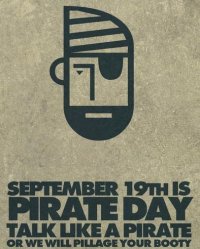 “Aye, today be Talk Like a Pirate Day! On this fine day, everyone can talk like a pirate all day long.”

My pirate speak typically sucks, but today, everyone can try out their pirate speak and not be looked at like a complete idiot… if people do look at you like an idiot, just tell them what day it is and everything will be cool.

I won’t often do this, but I feel I need to make a comment about a current event. I just want to make a small observation about the stupidity that is Imus… To me, it wasn’t that he said something completely distasteful, or that he has done it before, just not to this extent. Or the fact that his apologies and reasoning just don’t come across as sound.

What made this incident so bad was the impact that it had on the women of Rutger’s basketball team. Did the comments offend them, more than likely… Was it going to scar them for life, probably not. To me it was the timing that made it so bad. The comments coming just a few days after their appearance in the national championship game and turning all of the attention away from their successful season and to the idiot that is Imus is the horrible part. This is a time in their life they will never get back. They should be celebrating their success, not making comments about their opinions on Imus. They have been robbed of something that is irreplaceable.