Since setting up my DVR to record Austin City Limits on PBS so I wouldn’t miss the Pearl Jam episode that aired in November 2009, I’ve been treated to a lot of really good music. Some very familiar (Kenny Chesney, Willie Nelson, Dave Mathews Band) and some that I hadn’t heard of. It is of one of these that I’m going to tell you about.

The episode from this past Sunday featured the artist K’Naan and Mos Def. Mos Def I’ve heard of (and can’t say I’m a huge fan of), but K’Naan was a complete unknown to me. I had never even heard the name.

The performance by K’Naan was amazing. His family is from Somali and left the country in 1991. His life growing up wasn’t easy and he uses his music to give you a little bit of insight into that life. You can check out the full episode online here. Really, you need to watch it. I’ve posted an excerpt of it below.

Mos Def performed for the second half of the show. Still not a big fan, but did like his song called Micheal which is a rendition of a Micheal Jackson song. The song right after that one, Quiet Dog I believe, was also very good. I did like him as Ford Prefect in the Hitchhikers Guide. 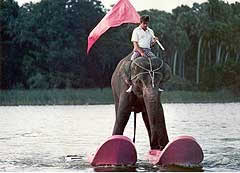 So I know a lot of people have heard the tale of the water skiing elephant. I think Rykert and his dog Nola or the keyboardists over at the CRB mentioned the impressive pachyderm at some point, but I’ve actually managed to have my automated Google-bots track down the source of this legen- wait for it, and I hope you’re not lactose-intolerant because the second half of this word is -dary story.

My Google-bots sent a link to a YouTube video uploaded by JPizzle1122. Who is JPizzle? Well, he is Jonny Paula, “the host of YouTube’s only interactive movie review show.” (That doesn’t mean anything to me either.)  In his January 13th episode he decided to review the Final Destination (not the original one that was OK, but the one from 2009 that was in 3D) and Honky Tonk Freeway. What is Honky Tonk Freeway you ask? I haven’t heard of that movie you’re saying. Well not many people have. It was a 1981 box office BOMB staring Beau Bridges and Beverly D’Angelo (before either of them were stars) and some others that you’d probably recognize from other great 80’s movies.

The movie even warranted a Razzie award nomination back in 1982 for Worst Original Song (“You’re Crazy But I Like You” by two people you haven’t heard of). It also featured such memorable quotes as “Yep…goin’ to the Super Bowl. Gonna sell me some cocaine.” Needless to say, this little gem pulled in about $2 million total in box office revenue back in the day. With all the “soon” to be stars in this movie, it’s probably worth watching in the way that you have to look at a car accident. You can even get it on Netflix.
Now I know you’re asking yourself how does a water skiing elephant fit into the movie Honky Tonk Freeway? Well, the premise of the movie is a small Florida town is going to get by-passed by a freeway. And by by-passed, we mean by-passed. Not even an on-off ramp. People won’t even have the option to stop. In an effort to “stop” the freeway, the small town mayor and the business decide to come up with tourist traps (for lack of a better description) that’ll make people want to stop. One of those tourist traps is Bubbles the Water Skiing Elephant.

The Horsehead Water Ski Club in Strahan, Tasmania is going to try and break the world record for number of water skiers behind one boat again. The attempt is set for January 30, 2010. They’ve been trying the last couple of years, but have encountered some engineering difficulties that prevented them from succeeding.

And if you want to see some video of it, here it is…
100 Water Skiers
In 2008, they tried to break the record with 121 skiers. What will they try this year?
For more details, be sure to look around their website.
Visit bfooter.com… More pictures, more videos, more water skiing stuff.
January 13, 2010 Posted in bfooter.com1 Comment

Who knew that hangovers + nudity + waterskiing + near hypothermia = community event to boost business. Yeah, that’s right, it’s a community event to boost the communities business. They first tried the Bun Run (that’s what they call it on) out on New Year’s Eve, but that didn’t work so well (put a dent in the supper business), so now they do it on New Year’s Day and it’s been working well for 30 years now. Granted it’s happening in California, so the water is a “balmy” 46 degrees, but that’s still cold.

First off, some props go out to the Mad-City Ski Team, Skipper Buds and Malibu Boats. Based in Madison, WI, the ski team performed a benefit show on December 19th called Project Snowflake to raise some dollars for he local children’s hospital. They braved 30 degree weather and 36 degree water to raise about $3k for the American Family Children’s Hospital. They had fun for a very good reason. Check out the story on their website for more details. You can also donate to the cause. Details are in the Mad-City story. You ask why this made a barefooting website? Well, they had some barefooting in their show. Picture below.

Next, 30 years ago a town in California decided they needed a way to boost business on New Years. They settled on the Bun Run. It’s naked water skiing on New Year’s Day. Read the story here for more details.

Finally, there are a group of wild and crazy guys up near Montreal, Canada that like to do some water skiing in the winter. It sounds like it’s an annual tradition and they have a lot of fun in the process. Watch the video below…