The Mad-City Ski Team just held their 2nd annual Project Snowflake this past Saturday. They performed a water ski show to raise money for the UW Children’s Hospital. Now, you ask, what’s so special about doing a water ski show? Well, the Mad-City Ski Team is from Madison, WI and in December, there is typically snow on the ground and this year was no exception. From 6pm the day before till 6pm the day of, the entire area was under a winter weather advisory, but they still did their show, amongst the freshly fallen snow. And they even did a little footing…

For more details about the event, be sure to check out the team’s website for more pictures and videos from the show.

First off, some props go out to the Mad-City Ski Team, Skipper Buds and Malibu Boats. Based in Madison, WI, the ski team performed a benefit show on December 19th called Project Snowflake to raise some dollars for he local children’s hospital. They braved 30 degree weather and 36 degree water to raise about $3k for the American Family Children’s Hospital. They had fun for a very good reason. Check out the story on their website for more details. You can also donate to the cause. Details are in the Mad-City story. You ask why this made a barefooting website? Well, they had some barefooting in their show. Picture below. 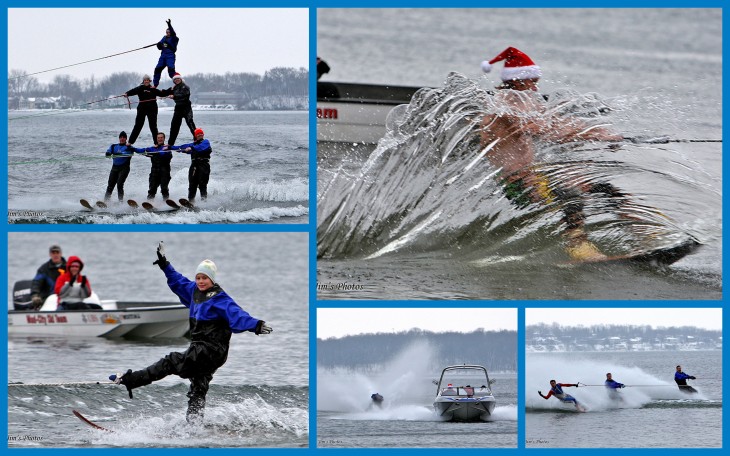 Next, 30 years ago a town in California decided they needed a way to boost business on New Years. They settled on the Bun Run. It’s naked water skiing on New Year’s Day. Read the story here for more details.

Finally, there are a group of wild and crazy guys up near Montreal, Canada that like to do some water skiing in the winter. It sounds like it’s an annual tradition and they have a lot of fun in the process. Watch the video below…

This past weekend I attended Winter Waterland hosted by the Rock Aqua Jay.  I’d like to congratulate and thank them for an excellent event.  Granted this event was barefoot specific, but it was the only event going on in the state of Wisconsin that would allow people to get some water time in the month of January.

Granted there is a fair amount of skiing going on in the state of Wisconsin right now, but most of it it taking place on hills… like Cascade, Devils Head or Tyrol Basin.  Some of the lakes are busy too… lots of ice shanties dot the landscape and snowmobiles cruise around the lakes.  Boats are typically no where to be scene.  But this past weekend, the worlds of boating, waterskiing and snow mobiling colided.

The scene was the Anchor Inn located in the booming metropolis of Newville, WI.  Located at the Highway 59 exit off of Interstate 90… the exit with McDonalds, Culvers and the big apple in the sky (really not sure what that is, but it’s there).  The crowd began to gather in the morning and registration was a bit frantic.  It was a perfect winter day for waterskiing and people wanted in on the event.  Mid 20s, overcast and snow falling with the occassional chuncks of ice floating down the river.

Once registration was complete they launched the boats and started crusing around the river a little bit to get them warmed up.  The only problem is, with the boats creating some waves, I think they broke some more ice free from up river and then ice starting flowing down the river in ernest.  About 45 minutes later, the flow of ice finally started to subside and the first skiiers, already suited up, began to get a little anxious.  People wanted to get on the water.

The first skier of the day was a little girl (didn’t catch her name) and took to the water on her swivel ski to the cheers of the crowd.  Subsequent skiers did the same… more swivelers, slalomers, trick skiers and what not.  Everyone had fun.  Some of the skiers, mainly the little ones and some the ladies were carried from the dock to the hot tub that was waiting to reheat everyone.

As the skiing continued, the ice flow down the river continued to get less and less and finally the barefooters were allowed to hit the water.  Many people just did steps offs, while I was one of the first to do a deep water start, fulling taking the brunt of the cold water.  I won’t say my run impressed the world… it was short, through some rough water, ending with some face plants.  But it was fun at a cost of about $2/second for the run.  Still worth it.  As I made my way off the dock I ran into Ben from the Must-Skis.  I looked at him and mentioned that it was Miller Time now and he was nice enough to hand me his can of Miller Lite.  I handed it back to him empty a moment later.

Tommy and Chad from Beaverland really got their money’s worth.  They doubled up their runs… Tommy road along with Chad on his run and Chad road along with Tommy on his run.  So they each got two pulls.  They had some of the more successful barefoot runs of the day, with one of them even managing to throw a tumble turn.

As the skiing and barefooting wound down, the activity in the bar, the Anchor Inn, picked up.  People piled in , ordered food and drink and even some raffle tickets to help raise money for the Rock Aqua Jays.  The bar was busy, but dealt with the crush of people quickly.  I had some of their cheese curds, which were very good.

I had to leave a little early, really just as the party was getting started, to head to another event, but I’m sure the rest of the party was a good time.  Talking with Joel from the Aqua Jays, he mentioned that about 35 people or so took to the water.  Much props to the Rock Aqua Jays, Anchor Inn, Ski H20 and the rest of the sponsors for hosting a great event.

They did announce that this will become an annual event for the Jays that will take place the weekend before the Superbowl.  Looking forward to it 2009.

The Bikini Girls from Madison… Heather, KTB and Anna