Enjoy… it’s a fun show to perform and be a part of. I hope you like enjoy “Because of the Fun!” 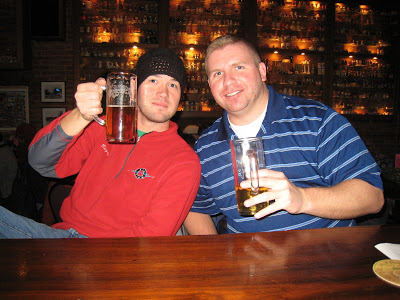 February 19, 2009 Posted in bfooter.comLeave a comment
That is what it took to write this post… not really, but it has been along time coming.  Here’s a look back at some the best pictures from 2008. My photo blogging took a bit of nose dive last year after June 1st due to the lakes closing in Madison.  When you drive 45 minutes to practice and don’t get home till 10pm or so, you just don’t have that much spare time.  The camera was still busy, so here’s a look back.
As those that follow the site know, my ski season started early in 2008.  January 26th to be exact. I went south to get some skiing in, but not very far.  Just a mere 30 minutes.  The ski site looked like this…
And the water was cold…
But it wasa fun…
The the skiing too a hiatus for a few months.  It took till the beginning of May before we back on the water…
But it has to complain when your nights on the water end like this…
A week later, the Best Dam Barefoot Race took place.  It was a little cooler this year, but still a whole lot of fun.
As May wound down, we had some very nice weather, which we made good use of…
Then, the rain hit, and it hit hard…
Leaving us with this…
And this….
So Mad-City headed about 45 minutes north, to Lake Wisco, to practice.  One of the nice things about that is we had nights that looked like this at the end of the night…
And this…
And resulted in fun practices like this…
My boat also made a few trips to Lake Wisconsin too. One of the better trips was on July 4th.  It took phone calls until 1am the night before to finalize the plans, but they were finalized and we skied on some nice water in some great scenary.
When State arrived, the rain made another cameo appearance…
But it didn’t stick around too long…
And it was still a whole lot of fun…
And we put on one hell of a good show…
Resulting in this…
The following week we did a road show in Portage, so I had a chance to do doubles again…
And then the next week we did yet another road show, this time on Lake Michigan. Unfortunately, there were 4 foot rollers there to great us…
Finally, Nationals arrived.  After a season of driving, late practices and little sleep, our Nationals show went very well…
http://video.google.com/googleplayer.swf?docid=6358065159186391740&hl=en&fs=true
And after our show, we hit “The Bar”…
Our efforts were rewarded…

After Nationals, the Madison lakes slowly reopened, so then we just had some fun….
And more fun…
And occasionally, we needed supplies delivered…
So the nights would end like this…
But then we’d go out again the next night…
I did get to hit the ramp a little…
And the water…
Finally, fall arrived, and the last trip out on the lake…
Then winter arrived and more nights would end like this…
So that’s the 2008 in pictures.
Visit bfooter.com… More pictures, more videos, more water skiing stuff.
October 23, 2008 Posted in bfooter.comLeave a comment

I just finished posting Mad-City’s National Recap over on the Mad-City website.  Once again, it features a highlight clip.  Here’s the link. If you don’t want to read the whole recap and just want to see the video, here it is…

I’ve just posted Mad-City State Highlight Clip online. You have a couple options to view it…

You can now watch Mad-City’s 2008 National Championship Winning Ski Show online. Just go over to WebCast-TV.com and click on the Mad-City link. They also have the other 13 team’s shows posted.

Yes, Mad-City is a ski team, but our highest scoring act wasn’t a skiing act… technically… it was our continuous comedy… all the little things that go between the water skiing acts. Here is undoubtedly the highlight of our comedy.

The Evolution of Dance 2.5.

You might want to hit the rest room first, some people have had a hard time controlling their bladder while watching this.

Yes, I’ve been MIA most of the summer here. More details on that later…

Just a little reminder that the show ski Nationals are this weekend up in Wisconsin Rapids. Mad-City skis 3rd on Saturday so we’ll take the water about 10am. If you plan to watch us, you’ll want to be up there by 9am.

From the east side of Madison, it’s a 90 minute drive. Take I-39 north, then highway 73 west/north. Turn right (north) onto County U, then take a left (west) on South Park Road. The ski site will be on your right.

If you do come, the beach at Lake Wazeecha is red sand. It stains clothing and people. Wear older clothes that you don’t mind getting dirty. Wear white shoes only if you want them to turn red.

Can’t make it? Plop down in front of your computer and watch the LIVE webcast. Just go to USA Water Ski for more details or click here.

Hey Everybody! Mad-City has been braving the very brisk waters of Lake Monona the last couple weeks getting our skiing legs back underneath us in preperation for our first ski show of the year. And it is coming up fast. We’ve had 3 practices on the water so far and have our first show already. The team suits up on Sunday, May 25 at 6pm for our first show at Law Park (just east of the Monona Terrace on John Nolen Drive). It’ll be a little rough, but come watch it anyways. You’ll be amazed when you stop back in a couple weeks and see how much our show will change in such a very short time.

Here’s a couple pictures from the first few practices. Enjoy!

Anna’s face shows just how cold the water is!

Landing after a 3-high

Dano remembers how to do Helis

Paul on the wakeboard

Turns out I was on a page in their article titled 10 Best Places to Ski and Live. Now I’m happy to see Madison, WI ranked on their list, but I wish they had spent just a little bit more time writing their paragraph about Madison.

First off, the image is straight off the Mad-City Ski Team’s website. I know, I help run the site and know the person who put the image together. It isn’t a simple photo, there is some photo shop skill on display there as well. The kicker is photo credit doesn’t list the person that created this image or the team. It lists the person that sent them the image. Not good in my opinion.

Next, they talk about Mad City being a “show skier’s haven.” Based on that comment and the picture accompanying the article, I’m guessing Madison made the list, at least in part, because it’s home to the Mad-City Ski Team, winner of 3 of the 4 past National Show Ski Championships. If that’s the case, then just come out and say that it in the article instead of just the allusion to it by referencing Madison’s very common nickname which is incorporated into the team’s name.

The next thing that irked me is they completely got the number of lakes in Wisconsin all messed up. They point at the Minnesota is the land of 10,000 lakes and Wisconsin isn’t that far behind. Now I knew off the top of my head that Wisconsin has more lakes than Minnesota. Using the internet I easily verified that. Wisconsin has about 15,000 lakes, significantly more than the 11,842 lakes in Minnesota. If you’re going to point out how many lakes a state has, even in general terms, make sure you get it right.

Finally, going back to the picture. It’s a picture right off the ski team’s website, so they know where it’s at. I think the picture was on the WWSF’s site too, and if they got it there, they were obviously looking for a Mad-City picture for their article and the WWSF site has links to the team’s website so they could find it. Plus, if you Google the team name, the team’s site is right at the top of the list. The website listed as a local reference for the article is the WWSF website. Nothing against the federations website, but ALL of the other 10 best places have a local chamber of commerce type site listed or local ski club site listed, not the state’s federation site. (I’m guessing this is related to the person who sent them the photo, but not positive.)

Once again, I love the fact that they like Madison enough to put it on their list and featured a picture of the Mad-City Ski Team in the article. They may even have mentioned my skiing habit of skiing until very late in the season in a drysuit amongst the snow and ice. But please do some basic fact checking. Or contact someone with some local knowledge to help with the fact checking.

Just a little note… One of the other cities listed, Seattle, Washington, has a great photo of someone skiing on Lake Sammamish with Mount Rainier in the background. It is a very scenic place to ski… I know, I’ve skied there. Very nice place to ski.