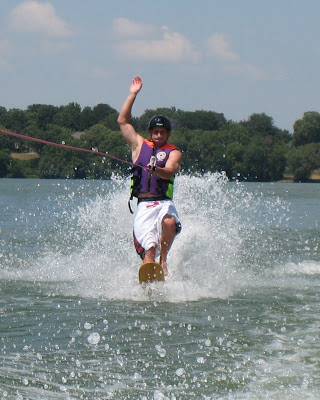 As I’ve mentioned before, I did some helis on the Thursday morning of State with the last one causing my ribs more than just a little pain. I didn’t stop doing helis then. I’ve been persistent on trying them again. I tried them again last Tuesday on the 24th. Only did one though as it ended in a painful fall that my ribs did not care for. For your enjoyment, here’s the video…

That also didn’t stop me… it just slowed me down. I did some more skiing since then, but finally took a couple more trips over the ramp tonight. First one was close again, just need to work on my landing. This video also shows the beautiful technique I use to wrap the rope.

This was my second and final attempt on the 30th. Didn’t finish my rotation, landed sideways and my ribs decided to stage a revolt. This one just doesn’t look good. It is bad from the beginning.

As I just mentioned, I did do some skiing this past weekend. The water was rough by the ramp, so I didn’t do any jumping. Here’s a few pictures from the skiing on Saturday…

Some footing in the bay… so calm. Bay has opened up enough where we can do laps again.

Ronée did some swivel toe turns…

Scotty wowed us with his mad Sky Ski Skillz

Ronée also did some Wake Surfing

Here’s Scott trying out the swivel ski… love the fact that he’s wearing a helmet!
The Mad-City Swivelers have nothing to worry about!
Visit bfooter.com… More pictures, more videos, more water skiing stuff.