This week has been a hectic one. But that is good. After the weather last weekend, I needed a change and the change came in early this week.

Honestly can’t remember the weather from Monday, but I know we had great conditions on Tuesday. Hit the water shortly after 5, calm winds, warm and sunny. Joining me were Sandy, T-Bell and Paul. I started off the night by doing about 1.5 laps to start with then going again and doing another lap on my second pull. On my second set later on in the night I did 1 lap, then immediately did .75 laps and then another .75 laps. Lots of footing. Sandy finally manged to get her first runs of the year in. She had previously tried on Saturday, but we had the rope issues courtesy of 7. She hasn’t forgotten how to foot either. She was also doing laps by the end of the night. T-Bell also joined in the laps around the bay as well. Paul’s footing night was cut short because of inner ear issues, but somehow still manged to do some flips on his wakeboard latter on. Needless to say, we put miles of water under our feet that night. Here’s a picture from Sandy’s first run of the year (not counting when she dropped a elbow in the water on her first cheek out.)

Sandy’s first run of the year

We actually did a little math to figure out how far we were going. Took 1 minute to go half way around the bay. 2 minutes made for a loop. 40 MPH that is about 1 1/3 miles a loop.

After getting home at 8 on Tuesday, I turned around and headed out for a dinner with a friend from college that was in town. We hit up the Wreary Traveler, Old Fashions (for cheese curds) and finished up at the Dane. Needless to say, this made for a very long, but very fun day and night.

Wednesday, I recovered. Also talked about skiing on Thursday but it didn’t look like it was going to work out so we called it off. Then about noon people started pestering me via email and phone. It was good pestering. After lunch I had decided to head out after work and at 230 had the people lined up.

After making the trip home to grab the boat and then back to the lake, we hit the water at 6. 7 & Ronée were the first to join me. We cruised into the bay. I took the first set, 2 pulls each around the bay. 7 then stunned us by making his deeps and making it half way around in 3 pulls. Ronée took a quick slalom run, even managed to have a nice wipe out as she picked the weeds off the rope. By now, we had been joined by Bugs and John who also wanted to get some runs in. Each did a lap or so. By the end of the night I had down about 5 laps around the bay, managed to hit something with my left foot (it still hurts tonight) and at some point managed to lodge a sliver or something in my right foot. Here are some pictures from the skiing on Thursday. 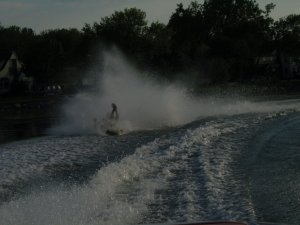 Ronée slaloming – her first time on the water this year

Apparently I’m going around a corner

The Whole Crew from Thursday night

Then Friday, I hit the lake again. This time for more recreation than footing. Still took a loop around the bay, but that was it.