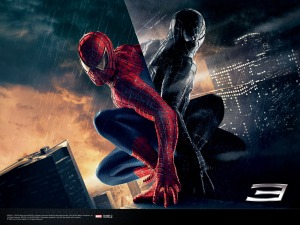 Well, this is one of the big movies of the summer and based on the box office so far, it is doing very well so far. I’ll be curious as to how much does in weekend number 2. Will there be repeat business? Repeat business is what makes the a movie into a modern day blockbuster ($250,000,000+). I don’t think there is any question it’ll do that, but will it do 500?

I caught this movie on the local IMAX on Monday night and my initial impression was it was a fun movie to watch. I had heard parts were complicated to follow but I would disagree. The movie has more plot than the average action movie so you do have to pay attention to follow the story, but it isn’t overly complicated or anything like that.

What really had me worried going into this movie the shear number of villains in the movie… you have the Green Goblin back, The Sandman is introduced and Venom appears. This brought back memories of the Batman movie franchise when the went from one villain in the first movie to two in the second and three in the third with each movie worse than the one before. Don’t even get me started about the fourth movie.

The writers walked a very fine line in Spider-Man 3, but they pulled it off coming up with a good enough story that balanced the 3 villains, introduced them and still kept a story going. My main issue with the Batman movies was in the third one it was an intro, meet villain #1, meet villain #2, meet villain #3, villains individually can’t defeat Batman so they team up… and still lose. There really wasn’t a good story connecting everything together.

I’m still trying to figure out where it falls compared to the first two and didn’t like it as much as Batman’s reintroduction in Batman Begins, but it was a good movie and if you like your friendly neighborhood superhero, you should like this one. Watching it on the IMAX always helps the experience too.