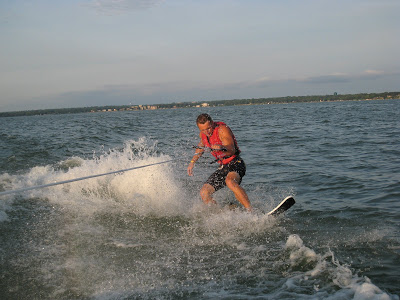 Last Tuesday, after catching Transformers the night before, I went out skiing with the family. My parents took their boat out and I took my boat out and my sister and her entire family came along too. Everybody did some skiing and my niece Anna went skiing long line for the first time without any problems. Tuesday night at practice I talked with John, Sandy and T-Bell about skiing Wednesday morning. John and Sandy were in… T-Bell wasn’t sure where she’d be.

Wednesday started off looking bleak. Overcast and gloomy and looking like rain, but I checked the radar and it was clear. I called John to let him know that skiing was on and then headed to the gas station while leaving T-Bell a message that we were headed to the lake. Just as I’m pulling into the gas station, I get a message back from T-Bell. “omw” Not being fluent it text massage, I wasn’t really sure what it meant, but as I finished gassing the boat up, it came to me. “On My Way.” By 815 everyone is there.

We start the morning with some jumping. I take a set, John takes a set and tries some helis and then T-Bell goes again. Here are a few video clips of some of the better ones jumps and falls…

After jumping we head to the bay to do some footing. I started off the footing by taking a quick set of 6 back-to-back runs. Everyone else takes a few runs as well before I take one more set. Here are a few clips of some footing…

After all of the footing, we were pretty much content with the amount of skiing we had done, but decided to cruise down to Waubesa to see if Paul and Joey were out on the lake. After stopping for some drinks, we finally found them floating with a boat that wasn’t running very well. Ronée was out with them and wanted to work on some toe turns so we pulled her on a few runs. She made some turns but was really leaning on Joey for support. After that, we grabbed some more drinks and finally called it a day. It was now a very hot day and we were all getting burned.

Next up on Thursday, it was a relatively quiet day of skiing, just a ski team practice.

Friday we got back on the water behind my boat and did a whole lot more skiing. I did a quick jump set, Joey did some swiveling, Paul surfed, Rob wake boarded and made what I think is his first inverted trick (a front roll to fakey?), T-Bell did some surfing and then I learned how to finally get up the board, then Kyle had his first towed experience behind a boat when he got up on the wake surf board. Finally it was time for people to get to their volleyball games so we called it a night. Here are the pics…

Finally, made it up on the surf board

Kyle’s first pull behind a boat

This is when it got interesting… I’m leaving the boat launch area and heading to the main parking lot as I’m starting the drive home when I feel my truck get yanked backwards and my boat starts to jump around. I quickly stop. I hop out and look and don’t see anything evident on the drivers side with a quick glance. Then I hop over the trailer tongue and see that the trailer wheel is no where near to being in the right location. Not good. The axle was completely loose.

That wheel is not in the right spot!

As luck would have it, my parents happened to be driving through the launch looking for my brother to see if he was out on Monona with their boat. My dad pulled one of the damaged u-bolts off the trailer and ran to Farm & Fleet. About and 75 minutes later he’s back with the parts, a jack and jackstands and we start re-attaching the axle to the trailer. An hour later, at 1030, the trailer is road worthy again.

Wheel’s back in place, fender is still messed up

Then I head out to catch the volleyball post game activities.

The next morning I wake up and head to the jump practice to get a few jumps in. Water wasn’t great, but my jumps went OK. Then T-Bell shows up and does some jumping, which I thought was great because she normally wants really good water conditions, but went jumping anyways. Then, she’s been thinking about trying flips for a while, and a few people know this. They mention that the tail wind is good for front flips and she decides to give it a whirl. I’ll let the videos speak for themselves. Here they are…

She wanted me to try heli’s too, but I declined saying I’d try them Monday night. Bugs was also inspired to try fronts and vowed to try them on Monday as well. Then we talk to Paul to make sure he can come instruct.

Sunday was a quiet skiing day for me…

Then Monday arrived… a day of reckoning… the weather cleared out by the afternoon, but just before we arrive at the lake the wind shifts and starts to come out of the north east… that means a head wind and rough water. Bugs goes first and tries his flips. Actually has a few good attempts. [Video coming soon]

Then I get some instruction for trying helis. Now to go back in time, this isn’t the first time I would spin as I leave the ramp…. year’s ago in 1992 I was jumping and my rope caught on the top corner of the ramp. As I reach the top of the ramp, I’m now facing the top corner of the ramp, which isn’t the right direction. I let go of the ramp, my spin continues and I land on the back and as I slide away from the ramp, the back end of my skis catch and that causes the front of the skis to come rushing at my face. Smack in the lip. Took out a big chunk of my to the point that I thought I had lost teeth. So, long story short, it took a lot of nerve for me to just decide to try a heli.

Back to today… I’m approaching the ramp, jumping from wave to wave with the rope wrapped… I finally skip onto the ramp and I’m going up. On my toes, thinking about not dropping my shoulder. I reach the top of the ramp, still a little shocked that I’m actually wrapped and trying a heli, then realize I need to let go of the rope with the one hand so I start my spin. And I make it all the way around so I land going backwards and almost on my skis. I completed my first attempt. Didn’t ski away, but I did it. Here’s the video…

Next attempt, a little better… I make it about 3/4 of the way around.

After we were done jumping, Paul did some more wake surfing… it’s his new addiction. Then he tries something new. He grabs one of Bugsy’s jump skis and starts jump ski surfing…

Then I did a little surfing and we called it a night.

For all the pictures in one convenient location, you can check out the Picasa Web Album with all of these pictures and some more.