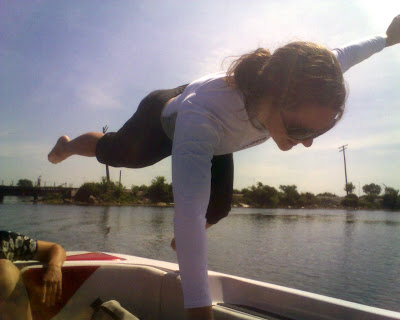 This past weekend was a busy one. With all of the crazy windy weather last week, I hadn’t skied since Tuesday so by the time the weekend arrived I was going through withdrawal.

Saturday morning arrived and with it, so did the Clean Lakes Festival. I met Imhof to pick up the sound equipment and then on the way to the festival we drove by the lake and were greeted by this.

Look at the glass calm water that I didn’t get to ski on!

Needless to say, knowing the lake was that nice made going to the festival that much more difficult, but it was important for the ski team. Spent pretty much the entire day outside as we arrived at 8am, run/walk started at 10, followed by the festival at 11. It ended about 6pm and then we had to clean up and then did our best to try and finish off the beer left in the half-barrels. The festival went very well… had nearly 100 people in the run/walk and had a decent amount of people show up for the first year.

The start of the 5K Run/Walk

You can see more pictures of the Mad-City Clean Lakes Festival over at Jim’s Photo’s.

After I arrived home about 10pm I turned around and headed to the Bells for what was suppose to be more drinking as that was where the half-barrels were going, but I arrived to just find John, Nick (aka Brad’s little brother) and Bartz drinking in the kitchen. John soon disappeared and then it was down to 3 drinkers. Then Bartz faded. T-Bell then arrived for a brief appearance before she to disappeared. Then I disappeared since I was planning on skiing the next morning at 8am.

Sunday morning arrived early, but it was a good one. Blue skies and very nice weather all around. I arrive at the lake and then T-Bell arrives with Nick (who was filling in for John). In my sets I do a multitude of laps around the bay that totaled nearly 7.5 miles through the weeds and even had my best one foot of the year so far, holding it for several seconds without get a face full of spray for a change. I managed to talk T-Bell into taking advantage of the glass calm water that is amongst the weeds. She puts on a show for Nick by doing some wake crossings, tumble turns and one foots and both feet. Then we get a call form Lisa asking if she can come take a run and 20 minutes later she joins us at the lake. Not really sure why, but T-Bel and Lisa started doing some stupid human tricks in the boat.

After arriving home about noon and eating some lunch, I took a nice long nap before heading to the ski show that night. Skied in 3 acts that night, opening, conventional doubles and ending. That night I realized I was sunburned from being outside pretty much most of the weekend.