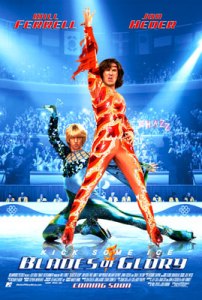 Blades of Glory is a movie I’ve been looking forward to for a while now. Will Ferrell doing for figure skating what he’s already done for NASCAR.

First, a little background about me… People are probably going to give me crap for this, but I’m a fan of Olympic quality figure skating. Granted I only watch it about every four years, but I still like to watch. I just think back to the day when in a youth hockey practice our couch had us try some of the stuff. It isn’t nearly as easy as they make it look. I fell on my ass… a lot. So I appreciate the sport. Not a big fan of “judged” sport, but done well, figure skating can be really good.

Simply put, I loved this movie. I laughed my ass of and so did the rest of the theatre. I occasionally felt bad for what I was laughing at, but knowing they were doing just for that effect made it a little easier. They rip on every aspect of figure skating there is (kids enslaved as youths, living weird lives, the guys aren’t that interested in girls, the costumes, the coaches, the announcers, everything). You name something that people make fun of related to figure skating, the do it. And they do it well.

Ferrell nails it. Heder hangs right with him. We get Craig T. Nelson reprising his role as coach, albeit it is coach of a different sport. And we get the creepy FBI agent from Prison Break playing the creepy figure skating parent. (Note, not all figure skating parents are creepy, for lack of a better word, but like any other type of parents, there are some.)

I won’t go into details of the plot because I don’t want to give away what little there is (think Tanya Harding) but there is enough where they can seamlessly work lines like “I put the bone in Zamboni” without it sounding contrived, and that takes some work.

The most amazing part of the movie is the number of real life really famous figure skating people that are in the movie that is ripping on their sport. They know what people say and they know the movie is being done in jest and they eat it up. Much props to Scott Hamilton, the voice of modern figure skating, for even poking fun with his announcing in the movie at how he announces in real life.

Finally, with the name of the movie, the first thing that comes to mind is the Bon Jovi song Blaze of Glory from Young Guns II. I so wanted to here this song in the movie somehow. But sadly, no dice. However, they do have Bo Bice, of Idol fame, singing a song that sounds somewhat similar to Blaze of Glory (video) called Blades of Glory (video). The song was different enough where it isn’t the same, but has that same sound to it (mainly the refrain). Oh, how low Mr. Bice has already sunk.

Horrible movie, incredibly funny and I loved it. If you want to laugh your ass off, go watch it.