Skip to content
October 11, 2008 Posted in bfooter.comLeave a comment
Way back in the 90s, there was a little sport called Free Style Jump.  Back then, they did a whole lot more of the ramp than just flips, gainers and helis.  They’d do all of that, then they’d do it on just a single ski, throw in some 1 ski 540’s, mobes, back mobes and some other stuff that I’m really not sure what they are and you have some pretty slick free style jumping.
It still exists today to some extent.  Now it’s called show ski jump, but just a bit tamer.  They mainly stick to the three staples (helis, flips and gainers), with a handful of people doing a bit more. You see the occasional 720, some one ski helis, and the vary rare mobious, but you just don’t see them vary often.  In the show ski world, unless you can stick damn near everytime, it’s just not going to make the show.  It’s too risky when you’re going for a state, regional or national championship.
But here are some people that don’t care about scores.  They just care about making you go “what the hell did I just see?” or “wow” or “holy shit!” and occasionaly make you’re jaw drop.
Free Style Jumping
Now some ski teams still push the envelope a little bit.  Mad-City has Paul O’Conner who’s one of a handfull of people who can through a 720, and probably the only one that lands it consistently.  They also have a stable of jumpers so they can put together double 1-ski gainers, or the more traditional triple gainers.  There’s also Jon Debelak who’s skied for RAJ & Badgerland that can through the Mobe and gets to pull it out once in a while.
Some other teams will put together some crazy jumps of people flipping over helis and what not, but nothing like old school free style jumping.
Visit bfooter.com… More pictures, more videos, more water skiing stuff.
September 29, 2008 Posted in bfooter.comLeave a comment

Well, I’m guessing the other hour and 23 minutes weren’t this funny, but the first 7 minutes were. In case you missed it, here is Tina Fey from SNL last night.

Here’s something from an email chain I typed up today… I was asked if we had solved the world’s problems… Here’s my response.

And yes we solved the world’s problems… the Mad-City Ski will be introducing a new car that runs off the energy generated by big bright show skier smiles. Just keep a shit eating grin on your face and it’ll cruise down the highway. Revert to a normal smile and it’ll stop damn near immediately. Still working on a way to power boats with this power, but they have a tough time maintaining their smiles as they pull people of the dock (some are concentrating just too hard to smile). Besides solving the world’s energy crisis and the issue of road rage (it’s just too hard to yell mean things while maintaining this smile), the ski team will make enough money to buy up Monona Bay and all the surrounding land and convert it into the world’s best show ski site and ski school. And we also plan to move MG&E’s hot water outputs into the bay to keep it heated year round for skiing.

I was then questioned on pissing off the property owners and fisherman, to which I replied…

In my plan, the property owners would be very well off. The team purchases all the land around the bay to plant more trees (wind blocks) and create a huge park/ski site along the south shore of the bay (that is the best shore in the summer with Madison predominate south winds.) Basically, it would be a park all around the bay with the exception of the side with the train tracks on the shore.

Fisherman would be happy too… based on the need to be able to run U shaped patterns, some new breakwaters would be installed in the southwest and southeast corners out in the bay to prevent waves from the U-shaped patterns from interfering with the calm water in the center of the show course. These breakwaters would be planted with trees to both provide additional windblocks and “hide” things that are out of the show course. The side of the breakwaters opposite the main show course would become prime fishing areas based on the new shoreline for small fish to hide which attract larger fish which the fishermen want. Due to the nature of the boat patterns, they’d be able to fish in these locations anytime, including during shows practices.

I can’t think of a way to help the ice fishermen though… they’d just be out of luck.

And in case you didn’t realize this by now… this is completely fictional and tongue-in-cheek. Not real. Don’t be offended or pissed off.

You can now watch Mad-City’s 2008 National Championship Winning Ski Show online. Just go over to WebCast-TV.com and click on the Mad-City link. They also have the other 13 team’s shows posted.

Over at BarefootCentral.com, one of the many minions Chuck has out reporting on events for him sent in a pretty good article about the Wisconsin State Show Ski Tournament. The article, written by Michael Frank of the Badgerland Ski Team, has lots of pictures from a lot of the shows and a good explanation of what show skiing is and how it’s scored. Go check it out.

Tampa Bay’s Ski Team did this at the 2000 Nationals in Rockford, IL. To my knowledge, this is a record that still stands today. I don’t think I need to write anymore about this, I’ll let the video speak for itself.

Yes, Mad-City is a ski team, but our highest scoring act wasn’t a skiing act… technically… it was our continuous comedy… all the little things that go between the water skiing acts. Here is undoubtedly the highlight of our comedy.

The Evolution of Dance 2.5.

You might want to hit the rest room first, some people have had a hard time controlling their bladder while watching this.

Yes, I’ve been MIA most of the summer here. More details on that later…

Just a little reminder that the show ski Nationals are this weekend up in Wisconsin Rapids. Mad-City skis 3rd on Saturday so we’ll take the water about 10am. If you plan to watch us, you’ll want to be up there by 9am.

From the east side of Madison, it’s a 90 minute drive. Take I-39 north, then highway 73 west/north. Turn right (north) onto County U, then take a left (west) on South Park Road. The ski site will be on your right.

If you do come, the beach at Lake Wazeecha is red sand. It stains clothing and people. Wear older clothes that you don’t mind getting dirty. Wear white shoes only if you want them to turn red.

Can’t make it? Plop down in front of your computer and watch the LIVE webcast. Just go to USA Water Ski for more details or click here. 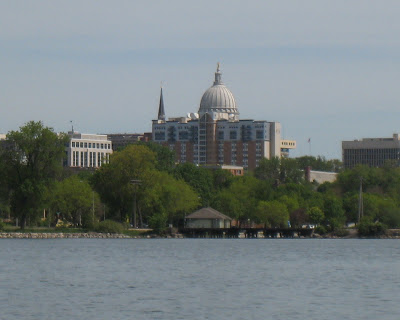 Finally had a chance to bust out the boat last weekend on Saturday morning and have a good time on the water. I forced everyone to have a early wake up, even though it is a late start for skiing, still early as we all adjust to a summer morning skiing schedule. I called for people to be at the lake at 830am. As I pulled in just a couple minutes late, I saw Sandy and John waiting. We launched the boat as Teri called to say that Rob and her were “almost” there. About 15 minutes after we got the boat in the water, they arrived, through no fault of Rob’s, or so he claims. Next time, I plan to just tell Teri 30 minutes earlier than the rest of us. They did bring some trail mix for everyone to snack on though.

Back to the skiing… We didn’t freeze, calm water and lots-o-sunshine. John, Teri and I did some footing, Sandy did a little slaloming, Rob got dragged around on the boom (much to our entertainment), and then we busted out my new surfboard. I won’t go into details about the day, I’ll just let the pictures do the talking… We took lots of them, and here the best of the pictures…

I just did some footing… here I am in front
of the hospital I’m spending a lot of time in now…
(Work reasons, not health reasons)

Teri demonstrated a tumble turn on the boom

John wanted to have some on the boom too

Teri on the board from up high…

John actually looses the rope now and then…

But sometimes needs it back

Rob learned how to surf…

Here’s he on top of the water…

Here he’s about to go upside down…

And here’s the backdrop for our skiing, the state capital

Back to my earlier comment about dragging Rob around on the boom… he tried he hand (or feet) at barefooting. Now he’s not a small person and tested out the boom. He threw up some big splashes with some of his tumble up attempts, even dosing the camera once. We decided to catch them on video. I need to do a little editing and set the videos to music for maximum entertainment value. Be sure to check back.